Every time I see people discussing MapleStory 2 I hear negative reviews about it. Negative reviews when we’ve only gotten a single picture and no details whatsoever on the game. I would love for people to wait until more information is released on the game in order for them to form opinions, but I guess they can do whatever they want there. But what I find so ridiculous is some of the things people say. Some of the statements. I find them ridiculously ridiculous, full of ridiculousness and, quite frankly, ridiculous.

For example I was watching a video on Youtube of a guy talking about MapleStory 2. He showed the picture that was released by Nexon and made his dissatisfaction known. He was stating that he “wasted 5 or 6 years playing this game” (referring to MapleStory). He said that “the thing [he] liked about MapleStory was that it was 2D”. “It’s a sad, sad time for all of you MapleStory players”.

Now I’ve said “maybe I’m just stupid” on several occasions and I’ll say it again. Maybe I’m just stupid, but last time I checked when a company releases a new game, whether a sequel to another game or not, usually this doesn’t affect the original in any major way. He said that he wasted his time playing the game. I don’t understand. The game is going to be shut down eventually. So you choose to complain for no reason that you wasted your time playing the game rather than thinking that in however many years when the game can no longer sustain itself and the decision is made to shut it down your time would be wasted? Umm MapleStory is still going to be 2D. I’m not getting the point with that. And instead of acting as if Nexon just announced the shutting down of the game, by describing the announcement as a sad, sad time, why not understand that it’ll likely be more beneficial to Nexon for them not to release another 2D game? It’s not all about what we want. It’s what Nexon feels they can make the most money off of.

“Even having the number ‘2’ in the name, like MapleStory 2. Who the heck does that? That sounds so cheesy”.
Call of Duty 2
Diablo 2
Battlefield 2
GTA 2
Starcraft 2
Team Fortress 2
Halo 2
Portal 2
Battlefield 2
Mass Effect 2
Guild Wars 2
Left 4 Dead 2
Half-Life 2
The Sims 2
Final Fantasy 2
Crysis 2

I’d go on, but I’m getting bored. I just don’t get it. I didn’t see Mabinogi players complaining like this when they saw their franchise expanded from the fantasy life, casually calm social RPG to the 18+ blood splattering, sword burying, action game that is Vindictus.

“[Nexon] is for sure going to loose a lot of money”. I’ve heard that said time and time again. I don’t see why either. There are so many games which look similar to how that picture of MS2 looks such as Everplanet and they’re been general successful. Almost every other move Nexon makes people say that it’ll cost them a lot of money.

“I’m official going to quit MapleStory. I can’t express how much I hate MapleStory 2″.

-Explodes- YOU SAID IN THE VIDEO THAT YOU LOVE THE GAME. WHY ON GOD’S GREEN EACH WOULD YOU QUIT A GAME YOU APPARENTLY LOVE SO MUCH BECAUSE YOU DON’T LIKE WHAT YOU SEE IN A SINGLE PICTURE OF A GAME THAT IS ONLY PARTIALLY THROUGH DEVELOPMENT?”

“6 years of playing MapleStory down the drain”.

It’s a new game. A new game just like Mabinogi or Dungeon Fighter or Dragon Nest. The only thing different is that it will serve as a sequel to MapleStory. I don’t see what the big issue is all about. If you don’t like what you see in the game then don’t play it. If you like MapleStory then continue playing it.

As seen in Nexon’s Financial Deck, released along with the companies 2011 financial report on February 14, 2012, MapleStory 2 has been confirmed to be in development from Wizet, and it doesn’t seem like it will be 2D. This can be seen in the ‘Development of New Franchises’ section. 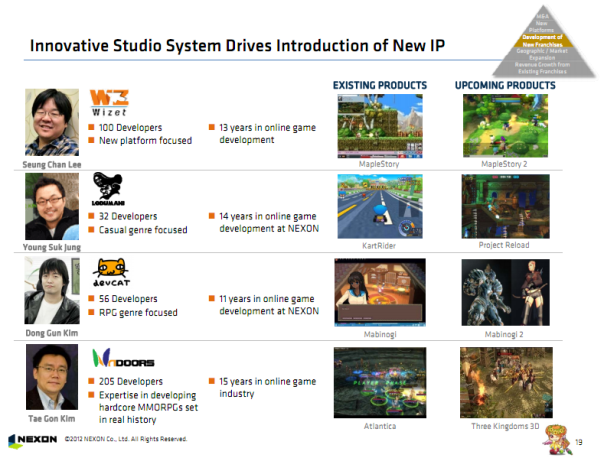 From this picture we can also see the development of the anticipated games Mabinogi 2 and Three Kingdoms. These two games have for some times widely known to be in development. With MapleStory 2 and Project Reload, however, although they have  been mentioned a few times before, this is the first big confirmation of their development and small peek (through a single minute picture) at how the games will look.